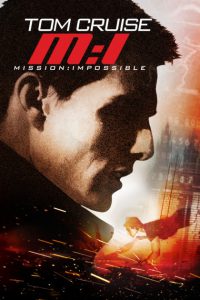 Mission: Impossible is the first movie of a big series of movies based off of the T.V. show of the same name from the 1960s to 70s and the movie keeps the unforgettable theme of the show reinvented by Danny Elfman. The movie is about a secret agent named Ethan Hunt played by Tom Cruise, whose IMF (Impossible Mission Force) squad has just been wiped out and he wants to know who did it and why they did it. It’s quite like a heist movie but instead of stealing for their own personal gain, it’s for the better of everyone. A lot of the film is pretty cool and makes you feel pretty cool just for watching it all happen. It’s also awesome that Tom Cruise performs all of his own stunts to provide a realism to it quite like The Dark Knight using a very minimal amount of CGI. The movie did have a lot of scenes that were genuinely tense and stressed the viewer with not knowing what the result of many actions scenes would be. 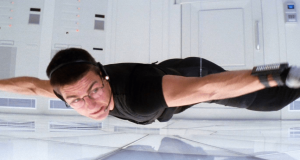 There was a scene in particular, with a helicopter and a train, and the CGI just looked terrible as well as the big light on the helicopter trailing behind the train. In that scene Ethan has some incredible, unrealistic luck that sort of takes you out of the movie. The movie makes up for that scene with the scene of Ethan infiltrating the headquarters of the CIA assisted by Luther (Ving Rhames), Krieger (Jean Reno) and Claire (Emmanuelle Béart). This scene makes the movie feel really like a classic heist movie in which you root for the “bad guys”, it’s also very tense and the result of the scene isn’t ever obvious. This film isn’t my favorite action movie but it would be understandable if it was someone else’s. This movie is good.