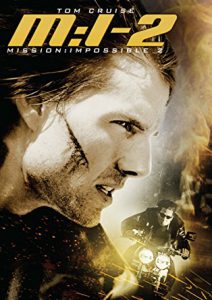 Mission: Impossible II, is from the year 2000 and it definitely shows. Tom Cruise returns as Ethan Hunt, Thandie Newton is Nyah, and Dougray Scott is Sean Ambrose, just to name a few good performances in this film. Hans Zimmer does a pretty good job with music but, other than his music, the tunes are just very dull and repeatative and sometimes annoying. Scenes are so incredibly in the style of the nineties that today some of it is almost unbearable. The action and spy scenes were good but pretty much everything outside of that was poorly executed and just went on for too long. After just a small dialogue scene, the viewer is begging for something to happen. The characters sometimes made stupid decisions but they became important plot points which in return, made the viewer feel clever for noticing their mistakes.

There is a scene that does this well and sets it up by making the most important part of a sentence interrupted and said by another character. Many of the action scenes were extremely over dramatized showing five different shots of the same stunt simultaneously.  It’s only really in the second half of the movie  that it starts picking up, and of course, it wouldn’t be a Mission: Impossible movie if it didn’t allow the main characters to have tremendous luck. This movie isn’t much of a comedy but it does have quite a few good lines that would make you at least smile. Also the relationship between Ethan and Nyah is developed well enough to see a connection between them. This movie is alright.