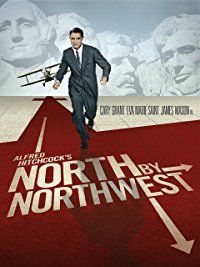 is another film from the great director Alfred Hitchcock, and in this movie, he doesn’t disappoint. Long before seeing this, I used to think that this movie was a James Bond movie, and the opening title was visually pretty cool so one wouldn’t be blamed for making that mistake. This film is a lot like Vertigo in the sense that it’s about an innocent person dragged into a dramatic situation he had no part in. The story is about Roger Thornhill (Cary Grant) and his kidnapping that created his sudden identity crisis leading to him being convicted of drunk driving, lying to a judge, and eventually even murder.  He evades authority across the country and meets Eve Kendall (Eva Marie Saint) who isn’t who she seems to be at first. 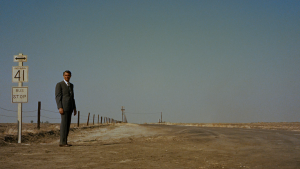 You never quite understand the reason for Roger’s kidnapping, but either way, you feel bad for him as he was just misunderstood for the entire first half of the movie. many of the sets looked very modern and you likely wouldn’t be surprised if the sets were used in a newer movie. This movie was more humorous than Hitchcock’s other movies but the jokes don’t ever seem out of place and they fit into the plot and characters well, as in, a certain joke would make sense with the certain character who said it. There are also a whole bunch of great shots such as the scene with the cop duster plane chasing Roger just as one example. The soundtrack by Bernard Herrmann, a Hitchcock favorite, was great, as expected from such a respected music producer in the film industry. This isn’t my favorite Hitchcock film, but it is definitely up there. This film is superb.